Icarus and Other Mythologies by Justin Polera 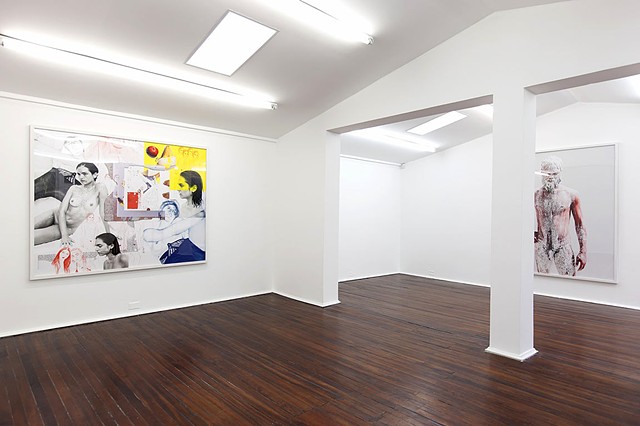 Icarus and Other Mythologies

Esteban Schimpf's body of work is concerned with big questions: what is the place of art in society, what constitutes an image, can an artwork be completely abstract, can art escape narrative and ultimately, what is art? When Schimpf tackles the most ambitious of these questions "What is art?" his answer is that of a man wrestling with his own faith "My response is simple, still lifes, nudes, and landscapes." This is a mythology intended to raise eyebrows with suspicion. We should not believe him in his conclusion, yet he believes it himself. In another instance of reflection he admits " I guess that I’m a liar. Never trust a man that doesn’t contradict himself!"

It is this statement that is mode of entry into the work, Schimpf makes images that reify the mental disposition in a contemporary world of disillusionment, connectivity, digital isolation and radical layering of the self. Schimpf’s photographs document excess, subversion into the ubiquity of screens and digital streams. Most poignantly the derailment of the American Dream. In a world flooded with images we identify ourselves as much with the reflection in the mirror as the “selfie” posted on social media. Yet we have very little physical attachment to others, even when we are with other people we are often staring into a screen. This condition of the radically fractured self is also universal, it is the stuff of mythology. In Walt Whitman’s often quoted “Song of Myself” he states:

The past and present wilt—I have fill'd them, emptied them, And proceed to fill my next fold of the future.

Listener up there! what have you to confide to me? Look in my face while I snuff the sidle of evening, (Talk honestly, no one else hears you, and I stay only a minute longer.)

Schimpf was born into a radically fractured family in Colombia and was adopted into a naturalized American family. For him the American Dream was indeed a promise that could never be kept. An early work of Schimpf was a manifesto that he co-authored with artist Daniel Keller titled "The Defenestrationist Manifesto". The work is an absurdist call for throwing things out of windows and draws as a source the canonical work of Yves Klein "leaping into the void" where the artist throws himself in full flight out of the window. This very early student work links to the title of the current exhibition, Icarus also seeks to fly but like Klein we know he is bound to fall. The lasting power of the Icarus myth is that we can relate to him - not that we imagine being him but that we share his desires. It is his internal trauma that we relate to not his physical fall.

In this recent body of work Schimpf also focuses on the internal trauma of doubling and repetition. These are two aspects of the uncanny, the double is the impossible replicate, repetition being the hallmark of trauma turned into neurosis (seen in obsessions, compulsions and addictions). In the photograph Castor and Pollux, 2016 the double is literally the silhouette of the main portrait. The silhouette appears as if cut out from a sky blue and white patterned sheet, perhaps the same pattern of a composition notebook. On top of the flat silhouette and in juxtaposition to it are an upturned yellow lemon and a dead bird turned on its side (perhaps stuffed). The portrait that is doubled is a man who although has the features of a black person, has been covered in pink child-safe non-toxic tempera paint. The brush-strokes are still visible. The deepest layer of the picture (or perhaps the one most in the forefront) is a black and white photograph of bananas and flowers. The figure-ground relationship is also shattered in that we are not able to distinguish what is in front and what is overlapping. The myth of Castor and Pollux is one of twins who meet a violent end, a metaphorical fall.

Falling is a repeated theme of the work. In one installation in the exhibition a mirrored photograph (an identical but inverted print) appears fallen onto the floor as if off the wall. Another image has a female figure lying on a white bench, her head and hair falling to the ground. This is the repetition of the fall of man, it is not a dystopian vision of resignation. Here Schimpf’s work performs a Sisyphean task of pushing the boulder up the hill only to have it roll down again, but repeating to strive, to climb in the face of the fall.

Like his clear paternal influence, Los Angeles based artist John Baldessari, Esteban Schimpf was trained as an abstract painter. He later came to portrait photography but brought with him the sensibility of painting. His work is formally composed like the mid-century modernist non-objective geometric painters, chief among them Piet Mondrian. Unlike Baldessari whose work relies on irony, humor, and transforming text into image, Schimpf’s work draws attention to the reverence of life boiled down to its most essential and the joy of looking at the human figure. The figure was long abandoned in the conceptual lineage that Schimpf clearly rejects. He does not follow the modernist desire for the new and innovative, the goal of avant-garde and neo-avant-garde to break with art history. Instead he aligns himself with the history of specific mediums of painting and photography. If photography was historically a form of documentation of reality (a claim rejected by the post-modernist structuralists) he reclaims this role. In some of his most moving work, the photographic portraits capture the subject’s body painted by the artist in baking flour, a performance we witness only by virtue of his photographic documentation. One image captures a nude female figure in a moment where she flings her head downward throwing the white powder off of her body and face, thus transforming from a white statue to a living woman.

The clearest act of layering is in the way the faces are pierced through. The figures are never in a space in the round, unlike cubism which attempted to capture many angles of the same object in one image, Schimpf captures the flatness of how we see images today in a digital world. The figures are always on a flat background with his layering emphasizing the flatness. In a world where our identity is as much a projection of ourselves as a physical embodiment, the portraits capture the loss of physical closeness but also the desire to be part of something greater than ourselves. Justin Polera Berlin, Germany